DESERTFEST ADD 20 NAMES TO LONDON LINE-UP INCLUDING GRAVEYARD AS NEXT HEADLINER!

Desertfest is thrilled to be kicking off the new year in style with the apt number of 20 names added for our 9th edition this May. Sweden’s most beloved export of hard rock, the impeccable GRAVEYARD will bring their unique bluesy tones to London as headliners of Desertfest 2020.GRAVEYARD have effortlessly carved a sound that is wholly their own, with Joakim Nilsson’s unmistakable vocals at the forefront, the bands musical prowess and authenticity remains undisputed over a decade later, as they continue to be of the leading bands in an often over saturated genre. With impeccable live performances, lyrical mastership and an evolving sound, GRAVEYARD is a sheer pleasure to experience live and we are honoured they are taking to our platform once more, allowing visitors an opportunity to bask in their sonic glory.  The Swedish family reunion continues as we welcome back one of the most synonymous desert rock (and Desertfest) bands, the iconic LOWRIDER return with not only a rare live performance, but their first record in almost two decades! Main man Peder gives the lowdown; “We are absolutely stoked to play Desertfest London 2020 – the festival that brought us back to life in 2013, and in many ways is the reason we are here today. To come back with our new album and play these songs live feels really, really special.” A masterclass in the melting pot of genre fluidity comes from two-man powerhouse BIG BUSINESS, the love child of former Melvin’s bassist Jarred Warren and former Murder City Devils drummer Coady Willis. BIG BUSINESS walk their own path with such purpose that anyone trying to pigeon hole the band into sludge, doom, punk or heavy rock falls under foot, an absolute “must witness live” act that we’ve been waiting to tick off the DF bucket list for a while.Psychedelic stoner rock trio SOMALI YACHT CLUB will make the trip from Ukraine to play Desertfest for the first time, their immersive soundscapes, with shoegaze and post-punk elements weaving its way freely into the mix, have helped propel the new wave of psych. Speaking of debuts, we are thrilled to play host to the first UK show for Denver melancholic doom outfit KHEMMIS, whose heavy metal undertones have reached critical acclaim in recent times. Sweden delivers once more for us with rock’n’roll four-piece MAIDAVALE providing a soundtrack that could be straight out the 1960’s, with Janis Joplin-esque energy and unfathomably catchy melodies. Fueled by raw power, twin guitars, screaming vocals and most likely Belgian beer is Antwerp’s YOUR HIGHNESS, who will be serving up a healthy dose of DIY attitude and heavy metal you can move and groove to.Elsewhere over Desertfest London an apocalyptic void is set to unravel when blackened hardcore outfit HEXIS take to the stage, or at least that’s what you can expect it to feel like. Whilst titanic sludgy riffs await with FIREBREATHER delivering the guttural goods. Something far more upbeat comes from Canada’s THE HAZYTONES, which pretty much does what it says on the tin – glorious, fuzzy, 70’s influenced riffs. Desolation and depravity will wreak from Birmingham’s OPIUM LORD, whose pummeling sludge-heavy sound has finally found its voice on their impeccable latest full length ‘Vore’, we are without doubt their set will become one of those legendary performances from the weekend, so don’t say we didn’t give you the heads up.  There’s more than meets the eye with KING WITCH, a tasty concoction of old-school heavy metal and 70’s doom readily ripens as singer Laura Donnelly leads the charge with a vocal range that allows these Scots to sit in a realm of their own. Long-time comrades and London locals GURT make their triumphant return to Desertfest, good times is the only name of the game for these lewd and crewed swamp-metal champions. Since the bells tolled at Black Sabbath’s opening track of their self-titled debut back in 1970, Birmingham has been the city and birthplace of doom, churning out one heavy riff after the other. Keeping their city’s legacy alive and coming to see us in 2020, is Svart Records’ four-piece ALUNAH. Plus, over the weekend we welcome Italian fuzzy horror freaks 1782, Cardiff’s own brutally crushing TIDES OF SULFUR who describe themselves as “The sound of the human spirit being tortured. Slowly.”, early-days heavy metal worship comes in the form of DOOMICIDAL who pay homage to the likes of Reverend Bizarre with psychedelic and occult-rock undertones. Mixing elements of bad-times psychedelia, noise rock and doom metal will be UNDER and, from the land down under, we welcome Australian rock’n’roll good timers A GAZILLION ANGRY MEXICANS, with Newcastle newcomers DUNES bringing their stoner rock boogie to round off this momentous announcement.  As you may have noticed, THE PICTUREBOOKS have unfortunately had to cancel their performance at Desertfest due to a schedule conflict out of our control. However with more acts still to be unveiled, plus day tickets on sale soon there’s much more still to come for our 9th edition! Weekend tickets are now on sale for Desertfest London 2020 via the following link – 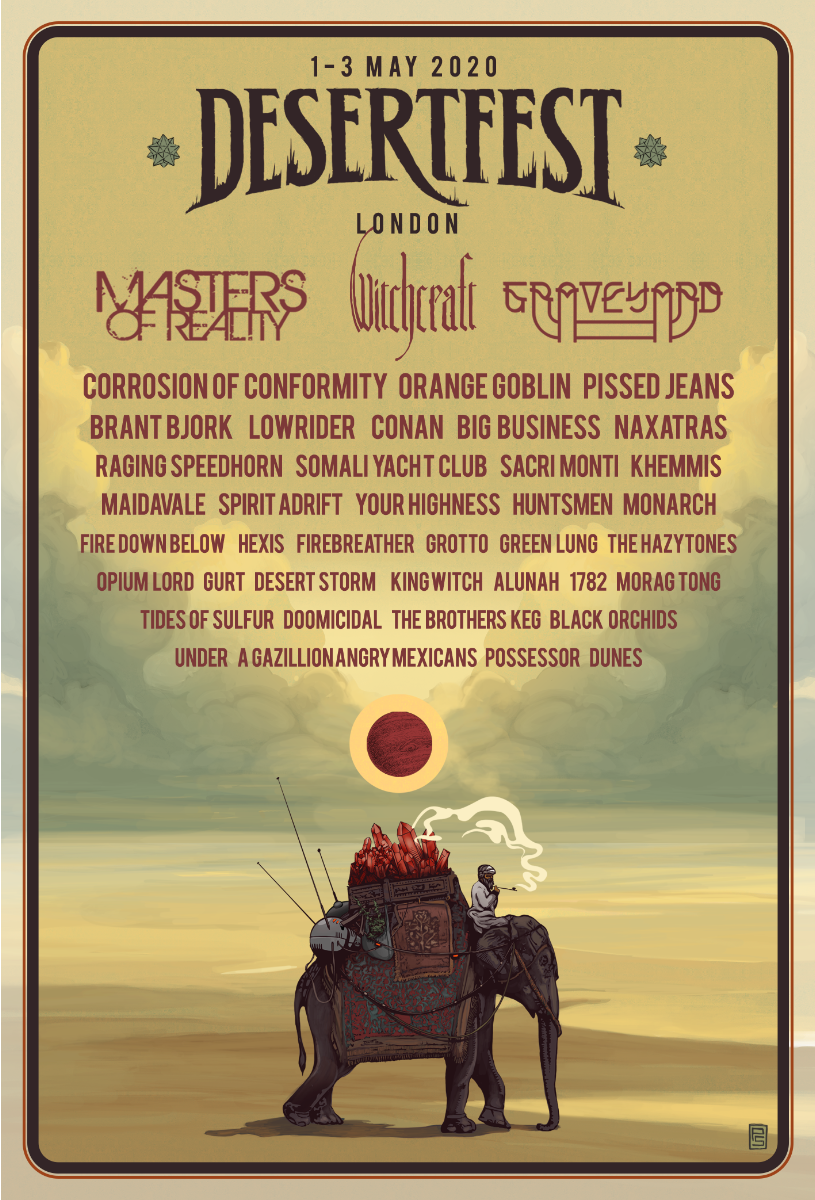